ENEA Group is a vice-leader of the Polish power market as regards electricity. It manages the complete value chain on the electricity market: from fuel, through electricity generation, distribution, sales and Customer service.
Two important system power plants belong to ENEA Group: Kozienice Power Plant and Połaniec Power Plant. The Group includes also Lubelski Węgiel Bogdanka - the mine is the major supplier of the commodity to power plants belonging to the Group. ENEA Group’s operations include also heat energy engineering in plants in Białystok, Oborniki and Piła. 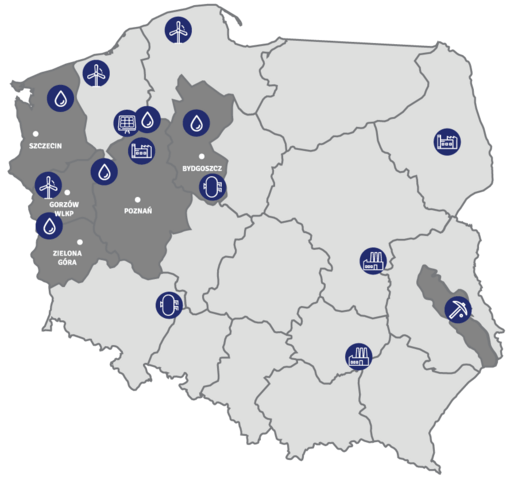 123.3 km of distribution lines including connections

24.5 TWh annual sale of electricity and gaseous fuel to retail Customers in 2020 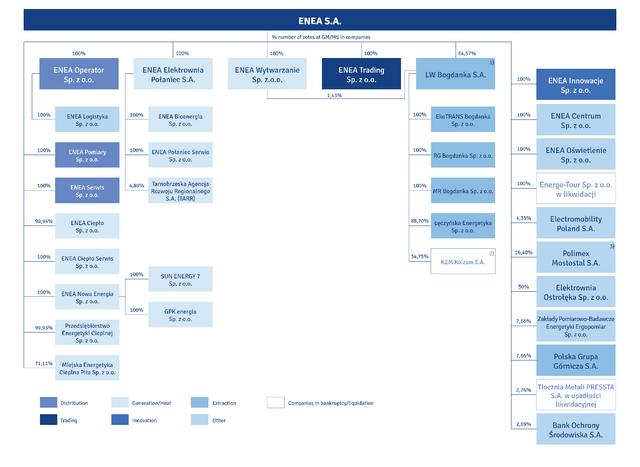 2)  Ruling on discontinuation of the bankruptcy proceedings/the company does not conduct business activity.

The main legal act regulating the Polish energy market is the Energy Law Act, supplemented by the associated regulations/ implementing acts, which are introduced most often by the Minister of Economy or Environment. Adoption of the Energy Law of April 1997 is regarded as the key moment in the process of establishing the domestic market. The Energy Regulatory Office (ERO) was also established at that time. The Office is still responsible for setting the prices of transmission of electricity as well as of the property rights from the certificates of origin of electricity and carbon dioxide emission allowances. After Poland joined the European Union, national law had to be harmonized with the EU laws. From then on, European legislation became the basis for developing national regulations governing the energy market. The key European document was the Directive concerning common rules for the internal market in electricity. The Polish market was also significantly affected by the laws, which liberalized the market in 2007, allowing individual consumers to purchase electricity from any operator.

Nowadays, electricity is a commodity traded on an open, competitive market. Electricity is similar to other goods, in that it is generated by producers, subsequently taken over by market intermediaries, to finally reach individual customers, businesses and institutions. Just as all other produced goods, electricity must be transported to the final consumer, which is effected via the transmission and distribution grid. 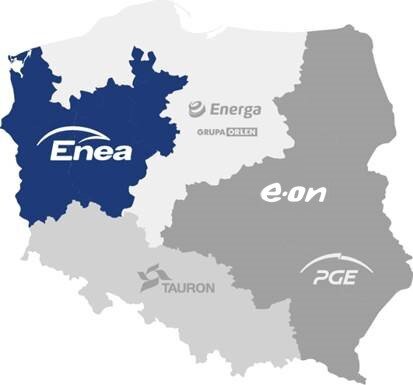 The energy market in Poland is divided among several energy groups, with the major ones, apart from ENEA, being: PGE, TAURON, Energa (Orlen Group), ZE PAK and E.ON (former Innogy, operating in Warsaw only). Pursuant to the Energy Law, special permits (concessions) issued by the ERO President are required to carry out an activity in the electricity transmission and distribution market. Leading electricity distributors in Poland include: ENEA Operator, PGE Dystrybucja, TAURON Dystrybucja and Energa Operator.

The continual strive for building an open and competitive market is based on the assumption that both generation and sales of electricity are not subject to a natural monopoly. Moreover, market mechanisms, understood as competition between energy groups, guarantee high quality of the provided services, reliability of the Polish power system, as well as low electricity prices. Access to inexpensive electricity is necessary for the economy, in particular for local industrial products to be able to compete in international markets and thereby build Poland’s competitive advantage.

In February 2021, the Council of Ministers approved “Poland’s Energy Policy until 2040” (PEP2040), a new strategic document setting the development directions for this sector. According to that document, in 2040 more than half of the installed capacity will be in zero-emission sources. A special role in this process will be played by adding offshore wind power generation to the Polish power system and the commissioning of a nuclear power plant. These will be the two new strategic areas and branches of industry to be created in Poland. PEP2040 is one of nine integrated sectoral strategies built on the Strategy for Responsible Development. PEP2040 is consistent with the National Plan for Energy and Climate for 2021–2030. PEP2040 contains a description of the condition and considerations of the energy sector. The document identifies three pillars of PEP2040, eight detailed objectives of PEP2040 and the actions necessary to accomplish them, as well as strategic projects. It lays out the geographic coverage and presents the sources of financing for PEP2040.

Detailed information can be found in the “Non-Financial Statement of ENEA Group for 2021” which is Chapter 12 of Report of the Management Board on the operations of ENEA S A and ENEA Group in FY 2021.

As at the publication date of this Statement, the ENEA Group has not defined any official goals for the purpose of managing climate-related risks and opportunities. A comprehensive review of such opportunities and risks, along with a plan for their proper management, will be conducted as part of the ENEA Group’s endeavors devoted to climate policy, which began in 2021. Within the framework of the non-financial reporting process carried out in respect of the said year, the Group updated its preliminary list of risks arising from climate change that have the potential of exerting a major impact on its business, revenues or expenses, which was originally prepared for the 2020 report, and, for the first time, the Group also identified climate-related opportunities. The reviews covered the short term (until the end of 2023), the medium term (until the end of 2026) and the long term (until the end of 2035).

For the purposes of this Statement, the ENEA Group’s climate-related risks have been assigned to the categories consistent with the standards described in the ESG Reporting Guidelines, a guide published in May 2021 by the Warsaw Stock Exchange, which have identified the following types of risk:

You can find detailed information here.

Do you wish to know more? Stay updated!

Sign up for our email notifications of all revelant business information.

Having in mind the diverse and international nature of Enea SA's shareholding, and also the provisions of the Best Practices of WSE Listed Companies, Enea SA guarantees the availability of its website also in English. In case of any interpretation doubts and discrepancies between the Polish and English versions, the Polish version shall prevail.